Godfrey Chitalu: The Zambian Goal King Whose Goal Scoring Records Were Dismissed By FIFA Because He Played In Africa

Godfrey Chitalu is a legendary Zambian footballer who played as a forward for Kitwe United and Kabwe Warriors. He is regarded as one of the greatest African footballers of all time. He is known for some great footballing records, including two African champions club records, being the only African to make the top 5 international goal scorers, and breaking two world records – twice. However, do you know that Chitalu has a better goal-scoring record than Cristiano Ronaldo, Pele, and Lionel Messi? While Messi has 91 goals in a calendar year, Godfrey Chitalu scored 109 goals in 1972. Unfortunately, Chitalu is not given much credit. FIFA may have deliberately shunned his heroics because he played on the African continent. 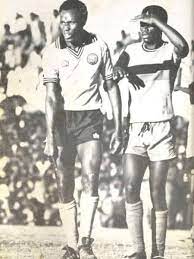 Godfrey Kangwa Chitalu was born on the 22nd of October, 1947, in the town of Luanshya, Zambia. His father, Lucian Chitalu, was a miner and also a Local Court Justice, while his mother Emeriah Chitalu was a housewife. Chitalu was the seventh of 9 children. Growing up in the township, he used to play youth football barefoot on the streets and the surrounding community grounds.

The process of playing football at the time was turbulent and painful. Since Chitalu loved playing football, he suffered from injuries, which included a broken arm. Sometimes when he is hospitalized, he would escape to meet up with his friends to play football. He represented his school team at the age of 10.

When Messi approached the record of scoring the most goals in a calendar year (91), breaking Gerd Muller’s record of 85, the Zambian Football Association was quick to highlight the achievement of Chitalu. Godfrey Chitalu played for Kabwe Warriors and won five trophies in 1972. 1972 happened to be his groundbreaking season.

According to verified statistics by the International Federation of Football History and Statistics (IFFHS), Godfrey Chitalu scored an outstanding record of 109 goals in a calendar year in 1972. Other sources claimed he scored 107. Nevertheless, beyond all unreasonable doubt, it was clear that Chitalu had surpassed Muller’s record at the time. He also bagged a whopping hat-trick of 18 for a year. The Zambian talisman also holds the unbroken African Champions Club football record for having the most goals in a match by an individual. He scored 7 goals in a single match. 51 years later, the record still holds.

In 1968, while playing for Kitwe United, Chitalu netted 81 goals, breaking the record of the great Pelé – 75 in 1958. He scored one of Zambia’s two goals during the 1980 Moscow Olympics and was also a leading player on the Copper Bullet national squad, which reached the 1974 African Cup of Nations final. Godfrey Chitalu once scored in 17 consecutive matches. Neither Ronaldo nor Messi or Pele has achieved such a spectacular feat.

One might want to argue that Chitalu played in a league with lesser talents or low playing facilities. Well, while that may be true, Chitalu’s story is unique because he did not enjoy the modern favours players like Messi have. Chitalu never had sophisticated training machines. Yet, he was a raw talent. Kabwe United and Kitwe United competed in International competitions as well. They were legitimate clubs recognized by FIFA. At his peak, Chitalu’s exploit was highlighted in local tabloids across the country. These records are not marred in secrecy.

Godfrey Chitalu died on the 27th of April 1993. He was the national head coach of the Zambian national team and they were travelling to Senegal for the first of their 1994 FIFA World Cup qualification games in the group stage. They were travelling via plane when it developed problems and crashed into the sea. Chitalu and eighteen players died in the accident.

In Zambia, he is dubbed a national hero and a street and stadium were named after him.

The African DreamStories from Africa

The African Dream is your news, entertainment, sports, and social website. We provide you with the best stories that inspire and social issues straight from the continent of Africa.

Africans Can Do It – Meet Mustapha Gajibo, The Nigerian University Drop-out Who Builds 100% Electric Cars And The First Producer of Electric Vehicles...

©The African Dream. All rights reserved - Powered by Tecric.

You have successfully subscribed to The African Dream newsletter.

There was an error while trying to send your request. Please try again.